5 most profitable betting angles for 2020 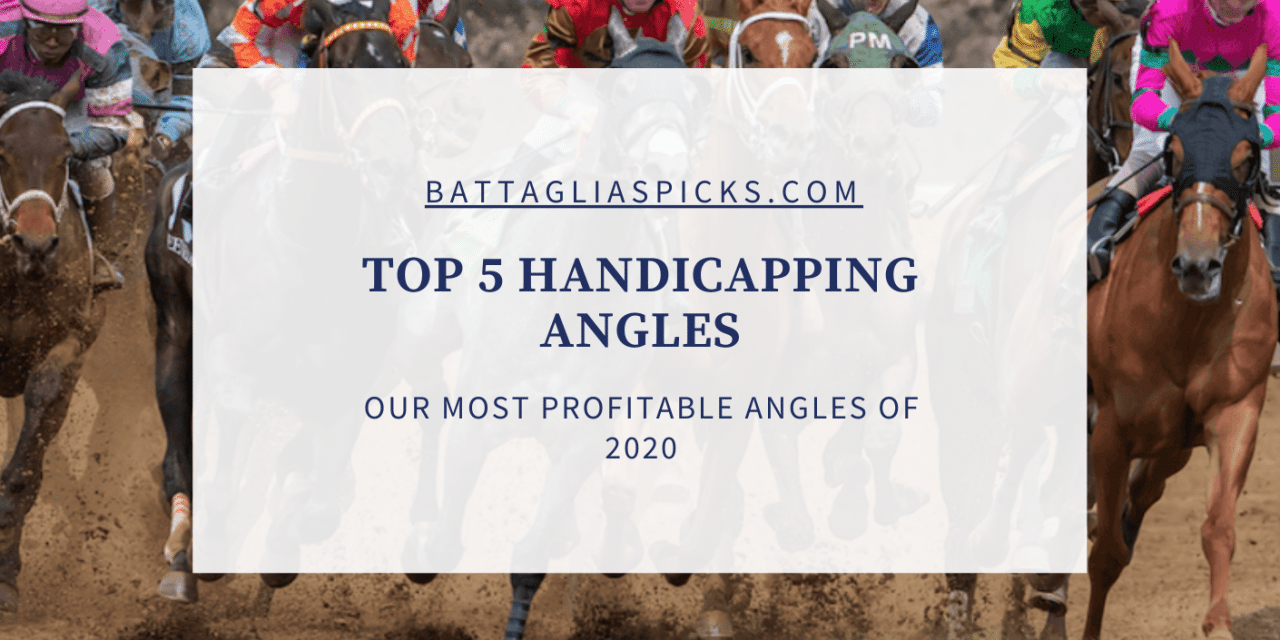 If you ask 10 different horse racing handicappers what their most profitable betting angles are, you will probably get 12 different answers. I have been at this game a long time, the first book I leared to read was the daily racing form past performances and my first math lesson was taught by the odds board. I tell you that because when I outline my 5 most profitable angles below, I am not just pulling these out of the air. These are tried and true angles that I have used for many years and the lord willing, I will continue to use for many more!

1) ALWAYS BETTING THE 4 YEAR OLDS OVER THE 3 YEAR OLDS FOR THE FIRST 6 MONTHS OF THE YEAR.

I know, I know….this handicapping angle is over for the year but mark it down, set a reminder on your phone, do what ever you need to do to remember this next year!

WHY/HOW does this work.  Every horse turns a year older on January the 1st no matter when their actual birthdate is. Tracks start writhing races for three year olds and up as early as March. The difference in maturity between a 4 year old and a 3 year old is dramatic especially that early in the year. If you followed our picks this year you know this was an especially good year for this angle. If I said we cashed on this 90% of the time, I would not be exaggerating. Just think of this- when the KY Derby winner runs back in the Breeders Cup classic that year everyone makes a big deal about “he is taking on older for the first time” and the Breeders Cup is in November! Just think of the advantage the four year olds have in March, April, May and June!

2) BETTING WITH THE TRACK BIAS.

We have had some our biggest money making days when there was  a strong track bias, either the track was playing to all front speed, or all late speed it doesn’t matter as long as you know which.

One of the reasons we do not finalize our selections for the following day until after all the races are over for the previous day is so we can see how the track is playing and make our selections accordingly. It’s not just a coincidence when on a particular day all the horses that make the early lead hang on to win, nor is it a coincidence when none of the early leaders win….it all has to do with track bias.

You should ALWAYS check the charts of the previous days races to see where the winners came from to see if there is a bias either way.

Think of it like this….if you were going to race somebody on a beach would you want to run closer to the water where the sand is packed down or further away where it’s all lose….of course the packed sand would give you a huge advantage. Now on a race track it’s not that pronounced but you get the picture.

When I see our competing sites offer selections 2 or 3 or even more days in advance, I just shake my head and think “what a bunch of morons”….lol

“Class comes out in the end” was drilled into my head over and over again. What is class?? Well my dad explained to be like this, note this was in the 80″s….he said “son, I am in pretty good shape and I can run pretty fast, but if I were to get into a race with Jerry Rice, even if he knees were bothering him or he didn’t feel 100% he would still whip me because I am not in his class” makes perfect sense!

Horses that have been competing well against a higher level of competition are just in another class than those lets say  run for claiming tags. Just like graded stakes runners are in a different class than allowance runners and so on. You can usually get a pretty good idea of a horses class by looking at their earnings, the higher the earnings the better their class—usually.

The stats don’t lie. We consider any win percent over 20% as good, over 30% is great. For example- I just watched the 8th race at Saratoga. Our top pick Forth Worth was coming off a year and three month layoff, which is not great but his trainer Pletcher is hitting at 30% with his runners coming off a layoff- boom cash them up he won easy.

I am not going to name names but looking at Ellis today, there is a trainer who is hitting at .05 from her 43 starts in claiming races, .06 from her 50 starters running in a sprint, and is currently 0 for 22 on the year—just put a big red X though that one. Eliminating the obvious throw outs is half the battle.

5) The lone speed is always dangerous

Thanks for reading—NOW LETS GET SOME WINNERS!