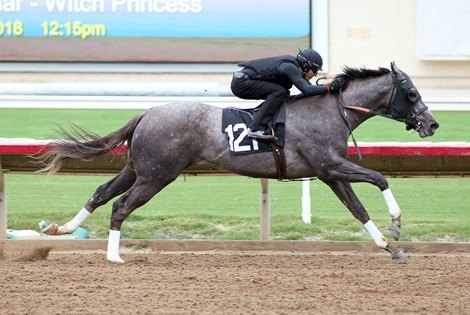 Three juveniles posted the fastest furlong work of :10 at the April 2 under tack show for the Barretts spring 2-year-old sale. The preview was conducted at Del Mar, where the sale will be held April 4, beginning at 2 p.m. PDT.

“We had a huge turnout today—it was incredible,” said Kim Lloyd, Barretts’ general manager. “We feel like the sale is shaping up very well.”

Ciaran Dunne’s Wavertree Stables has consigned the Into Mischief colt as Hip 167 in the supplemental catalog. He is bred by Brandywine Farm out of the winning Cape Town mare Cape Discovery. The colt sold for $110,000 at the 2017 Keeneland September yearling sale. He had been entered but withdrawn from the Ocala Breeders’ Sales’ March 2-year-old sale in Florida.

Bruno DeBerdt’s Excel Bloodstock is offering Hip 58, the Mineshaft filly and a daughter of the winning Forestry mare Noble Grey. Elena Crim’s H&E Ranch bred the filly and consigned her to the 2016 Keeneland November mixed sale with Susan M. Forrester, agent. The filly sold there for $25,000. DeBerdt bought her for $85,000 at the 2017 Keeneland September yearling sale out of the Summerfield consignment.

Most of the horses in the Barretts sale worked a furlong during the preview. Several, however, went a quarter-mile, and a son of Graydar  had the fastest time at that distance of :21.

The Kentucky-bred colt, Hip 121, is out of the winning Exchange Rate mare Witch Princess and is part of James (Jimbo) and Torie Gladwell’s Top Line Sales consignment. The dam is a half sister to multiple graded winner Tiz Wonderful. Amy Marie Bayle and Allen Racing bred the Graydar colt, who sold for $10,000 at the 2017 Fasig-Tipton Kentucky October sale.

“The track was playing a little slower than it has in the past,” Lloyd said. “But as long it’s safe and the horses come back good, we’re happy with that. The horses showed themselves very well over this track today.”